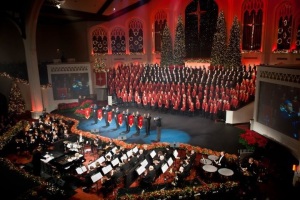 Believe – Carols 2011. Life for now or life eternal? Sometimes I know too much of how the program is constructed, but tonight, watching on television the broadcast for this year, I was again walking in the story – His Story – not wandering in my mind of how edits were done or what did not get used or … or …. or……

And that is as it should be even though I know without question that I Believe. I know decisions were made during Carols. Wow. And I know seeds were planted. That was confirmed yet again today when a person whose relationship with God I just cannot figure out but who came to Carols asked me for CDs to take to Michigan to her family. And I know there were folks at the church tonight manning the prayer line. And I pray that others will believe too.

This is my last blog about Carols 2011.  It has been an opportunity to focus on why
we do this.   Is it more important than being in your place on Sundays/Wednesdays? No – Absolutely Not – BUT – it is important in a different way because we use a different approach in the same venue to tell His Story in a sharply focused way to some people – maybe just a handful – among the thousands who came and however many who watched Carols on the web, watched tonight on television and will watch in the days to come. And among those are the channel surfers who landed on that station tonight just looking for something different to watch…and they stayed.

And the Word became flesh, and dwelt among us,
and we beheld His glory,
glory as of the only begotten from the Father,
full of grace and truth.
John 1:14
Merry Christmas
Emmanuel. God with us. I Believe.