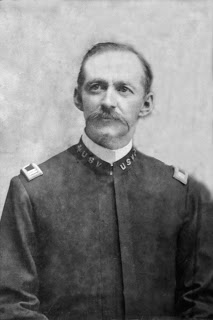 Often you hear law enforcement types talk about “persons of interest” – fairly sure I never want to turn up on that list!  It would be cool to be an interesting person (along with a lot of other things) – but I am fairly content flying below the radar and just getting things done without calling a lot of attention to it (especially to law enforcement).

During Worship last Sunday, Dr. Page adjusted my perspective on this. His reminder, God wants “persons of influence” – people who make a difference for Him. Hmmm. What would be missed in Kingdom Work, if I were not here? What opportunities would be lost? Can one person make a difference?

The handsome guy to the right is my great grandfather – George Austin McHenry (I like that name – to me it is a very strong name that reflects character).  “Ponnie”, as he was known to his six grandchildren (my Dad is the youngest of those), instilled in us all a sense of adventure, community service, doing what it takes, making a stand for what you believe, leading in church, all of that.  He died long before I came along but it is like I have always known him.

Ponnie was a physician like his father before him.  His son, Floyd, my grandfather, was a pharmacist and (GULP) politician (the first Chancery Clerk of Stone County), but my Dad and my youngest sister followed those same footsteps. He led a group of folks into Mississippi from up north to settle in the piney woods of South Mississippi.  Originally this was known as the Michigan Settlement in what we then northern Harrison County but came to be known as “McHenry”.  He traveled the world, leaving my great grandmother Una and my grandfather in McHenry doing things like building community and building a house (known as the G.A. McHenry House, it will be 114 years old this spring. It should be noted that my great grandmother managed most of the construction of the house and was a force to be reckoned with!). As a family they made a difference.

Ponnie was a Captain in the Army. According to his personal story, he finished his military career as a Major and Brigade Surgeon. He served in Cuba in the Spanish American War and helped in the fight against yellow fever. Again, according to his personal story, he made 24 ocean voyages traveling the world. Yet he returned to that small bustling community in South Mississippi to practice medicine in an “ordinary country practice”.

Never have I heard anything spoken against him by family or members of the community. He knew them all by name – Bond – Breland – Broadus – Hatten – Lott – names still prevalent in that area today.  He was a “person of influence”.

In Ezekiel 22:30, God was looking for a single person of influence. He found none. “I looked for someone among them who would build up the wall and stand before me in the gap on behalf of the land so I would not have to destroy it, but I found no one.” God was looking among His people and found no one who would stand up for Him. How heartbreaking that must have been / must be for God to not have someone willing to stand in the gap – stand up for what you believe – stand up for what is sound spiritual truth, stand up as Children of the King, not children of the world, be “Persons of Influence”.

As Christians, we have become numb – we know things around us are not right – but we look past them rather than confront them because it is just easier to go with the flow and be politically correct than to stir the pot. Somehow I doubt George Austin McHenry did that. Truth is, he became righteously angry about things he believed were wrong (there are documents that back that up). What if Jesus had done that? I, for one, am thankful He didn’t for if He had, we would be without hope.

II Chronicles 16:9 reminds us: For the eyes of the LORD range throughout the earth to strengthen those whose hearts are fully committed to him. I want to be found when God is looking for someone to stand in the gap for Him. But, the verse does not end there. It goes on to say: “You have done a foolish thing, and from now on you will be at war.”  As a nation we have done many foolish things. I pray that we will turn back as a nation to Him. I yearn to be again, “One Nation, Under God”.

We are not a people without hope but God expects us to stand in that gap, to be different, to stand for what we believe rather than turn our heads away. He calls us, by name just as great grandfather called the members of that young community by name, to stand for Him.

Lord, help me to be boldly a person who stands in the gap for you and be that person of influence. I worship you.

You are Emmanuel – God with us – I believe.